*Warning: There’s a little bit of strong language later in the piece. For those that don’t want to proceed, don’t. For everyone else, you’re probably now more titillated to read the piece (That was a pun).

Yes, I have been hibernating and studying and not just hibernating and wasting time, although I have been watching a good deal of Glee lately. There have been ups and downs, which have been mostly psychological: Am I actually improving? Did I start learning a foreign language too late in life to speak it without making a lot of mistakes? Will this agony ever end, or more specifically, when will those coworkers down the hall stop making fun of my Hebrew?

Thankfully, once I stop beating myself up, I can see that my studying is producing results. For example, a while back during Purim, I spent the weekend with a bunch of Israeli friends in Sde Boker. For the first time, I was able to actually speak in Hebrew for almost the entire weekend! I was both able to understand the majority of conversations and quick enough to respond most of the time. This was a huge step for me. Because I have been able to continue speaking in English, especially at work (I work for an English-language newspaper, after all), sometimes it’s been hard to gauge how far my Hebrew has come. This weekend was a much-needed ego boost. 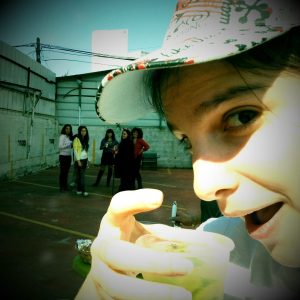 This year, I dressed up as Ashton Kutcher for Purim. People say there is a resemblance: You be the judge.

Also, when I stay with Uri at his family’s place, he often has conversations with his parents in the living room while I’m chilling in his room, which is a door away. He’ll then translate these conversations for me, especially if he’s talking about something that relates to me. Gradually over time, I’ve been able to understand more and more of their conversations. Last time, every time he came back he would start to translate and I would say, “Yes Uri, I heard.” He then pointed this out: “Laura, you can understand everything now! We can’t hide anything from you anymore!” I certainly hope that’s true…

But, with progress, there are always funny language mistakes along the way. This one has to be the best Hebrew mess-up I’ve had in Israel lately, and perhaps, ever. I was at a bar with a friend and trying to explain that another friend had recently gotten engaged. However, instead of saying “Hee hayta me’oresset,” which means she got engaged, I said, “Hee hayta me’onnenet.” They both sound similar, and I had learned both words within a few days of each other. When my friend started bursting with laughter, and asked, “Hee hayta me’onnenet al ma?” (“al ma” means “about what?”), I understood that I said the other word… which meant that I told him, “She was masturbating.”  I can tell you this: I’ll never forget either word now.

A picture of a drunk guy for good measure (Courtesy of Bistrosavage).

1 thought on “Hebrew update: Some progress and a dirty joke”